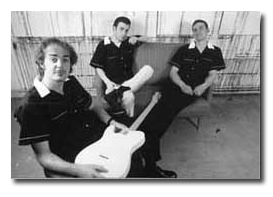 Langhorns, the instrumental surf band from Lund, a city without beaches. Three guys along with a part time horn-section succeed, despite the beachlessness of their natural surroundings, in being a vital part of the worldwide scene of surf-music. Their third full-length release; Mission Exotica is a delightful cocktail of all the stuff that has characterized the genre since day one. Surf-music sees its first light in a time when rock & roll swings wildly from one side of the spectra to the other and literally every influence is invited to participate in the spectacular circus. During a period of ten intense years surf music takes it shape: a hilarious mix of minimalistic blues-rock, jazz, psychedelia, R&B, flamenco, Latin-rock, Mexican mariachis and the seductive tunes of the Orient. The British invasion, however, locks the positions and puts an end to the heydays of development within the genre...until now. Recovering the sharpest punk rock style strikes, the Langhorns deliver a unique compound of a reanimated and driving sound featuring surf music style with rockabilly features. Assembled in 1995 in Sweden, the Langhorns started off as a two-man venture of guitarist Michael Sellers and bassist Martin Berglund. Following the duo's first experimentation sessions, they decided on signing up the works of drummer Rikard Swardh, that way defining the team as a three-element combo. During the next two years, the group played various concerts and gained consistent exposure within the local underground scene, especially due to their intense live shows. In 1997, the Langhorns entered the studio alongside producer Magnus Borjesson to work on their first recording. In February 1998, the team offered Langhorns released through the Bad Taste records catalog. Following the issue of the disc, they played yet another considerable number of shows all across Swedish territory. One year and countless concerts after, the Langhorns presented Club Gabardino, their second studio recording, certifying the band's cult status by then not only in Sweden, but also in the rest of Europe. — Mario Mesquita Borges/All Music Guide Langhorns is an instrumental surf music band from Lund, Sweden. The members are: * Michael Sellers - guitar * Martin Berglund - bass * Rikard Swardh - drums (joined the band later) The band is strongly influenced by Dick Dale and latin music. Some of their music has been used on Nickelodeon's cartoon SpongeBob SquarePants (contributed by LoveCat Music) and on the TV series Sex and the City. So far, they've released three albums on Bad Taste Records label: * Langhorns (1998) * Club Gabardino (1999) * Mission Exotica (2003) Read more on Last.fm. User-contributed text is available under the Creative Commons By-SA License; additional terms may apply.