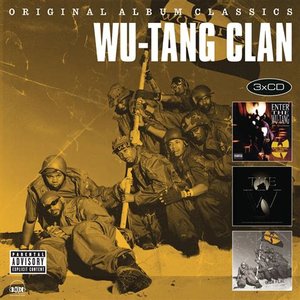 This goes back to nineteen
Ahem, check it, yo
GOOD MORNING VIETNAM!
Yeah, good morning to all you motherfuckin notty-headed niggaz
Word to the camoflouge large niggaz
Bitch niggaz fuckin my body
Bring that fuckin meth in here
Yo yo yo yo
Now we gonna drink some good Nightrain

Champion gear that I rock, you get your boots knocked
Then attack you like a pit that lock shit DOWN
As I come and freaks the sound, hardcore
but giving you more and more, like ding!
Nah shorty, get you open like six packs
Killer Bees attack, flippin what, murder one, phat tracks
A'ight? I kick it like a Night Flite!
Word life, I get that ass while I'm fulla spite!
Check the method from Bedrock, cause I rock ya head to bed
Just like rockin what? Twin glocks!
Shake the ground while my beats just break you down
Raw sound, we going to war right now
So, yo, bombin
We Usually Take All Niggaz Garments
Save ya breath before I bomb it

I be that insane nigga from the psycho ward
I'm on the trigger, plus I got the Wu-Tang sword
So how you figure that you can even fuck with mine?
Hey, yo, RZA! Hit me with that shit one time!
And pull a foul, niggaz save the beef on the cow
I'm milkin this ho, this is MY show, tical
The FUCK you wanna do? More than Spike Lee's Do
I'm like a sniper, hyper off the ginseng root
PLO style, buddha monks with the owls
So who's the fucking man? Meth-Tical
On the chessbox

Yo, yeah, yo
I leave the mic in body bags, my rap style has
The force to leave you lost, like the tribe of Shabazz
Murderous material, made by a madman
It's the mic wrecker, Inspector, bad man
From the bad lands of the killer, rap fanatic
Representing with the skill that's iller
Dare to compare, get pierced just like an ear
The zoo-we-do-wop-bop strictly hardware
Armed and geared cause I just broke out the prison
Charged by the system - for murdering the rhythm!
Now, lo and behold, another deadly episode
Bound to catch another fuckin charge when I explode

Slammin a hype-ass verse til ya head burst
I ramshack dead in the track, and that's that
Rap assassin, fastin, quick to blast and hardrock
I ran up in spots like Fort Knox!
I'm hot, top notch, Ghost thinks with logic
Flashback's how I attacked your whole project
I'm raw, I'm rugged and raw! I repeat, if I die
My seed'll be ill like me
Approachin me, you out of respect, chops ya neck
I get vexed, like crashing up a phat-ass Lex'
So clear the way, make way, yo! Open the cage
Peace, I'm out, jettin like a runaway slave

Yo
Ya gettin stripped from ya garments, boy, run ya jewels
While the meth got me open like falopian tubes
I bring death to a snake when he least expect
Ain't a damn thing changed, boy, Protect Ya Neck
Ruler Zig Zag, Zig-Allah jam is fatal
Quick to stick my Wu-Tang sword right through ya navel
Suspenseful, plus bein bought through my utensil
The pencil, I break strong winds up against your
Abbot, that run up through your county like the Maverick
Caps through the tablets, I gots to make the fabrics

Are you, uh, ah, uh
Are you a warrior? Killer? Slicin shit like a samurah
The Ol' Dirty Bastard VUNDABAH
Ol' Dirty clan of terrorists
Comin atcha ass like a sorceress, shootin' that PISS!
Niggaz be gettin on my fuckin nerves
Rhymes they be kickin make me wanna kick they fuckin ass to the curb
I got funky fresh, like the old specialist
A carrier, messenger, bury ya
This experience is for the whole experience
Let it be applied, and THEN DROP THAT SCIENCE

My my my
My Clan is thick like plaster
Bust ya, slash ya
Slit a nigga back like a Dutch Master Killer
Style jumped off and Killa, Hill-er
I was the thriller in the Ali-Frazier Manilla
I came down with phat tracks that combine and interlock
Like getting smashed by a cinder block
Blaow! Now it's all over
Niggaz seeing pink hearts, yellow moons
orange stars and green clovers
C.R.E.A.M. Shame on a Nigga Protect Ya Neck Bring da Ruckus Gravel Pit Clan in da Front Da Mystery of Chessboxin' Method Man Tearz Wu-Tang: 7th Chamber Wu-Tang Clan Ain't Nuthing Ta F' Wit Can It Be All So Simple Triumph Reunited Wu-Tang Clan Aint Nuthing Ta F' Wit It's Yourz As High As Wu-Tang Get Protect Ya Neck (The Jump Off) Conclusion Visionz A Better Tomorrow Older Gods Wu-Tang: 7th Chamber - Part II The Projects Bells of War Severe Punishment Can It Be All So Simple/Intermission Hollow Bones The City Intro Uzi (Pinky Ring) Duck Seazon The M.G.M. Campfire Careful (Click, Click) Take It Back Method Man (Skunk Mix) Wu-Tang: 7th Chamber, Pt. 2 Impossible Rules Rushing Elephants Black Shampoo Wu-Revolution get them out ya way pa Maria In The Hood Dog Shit Little Ghetto Boys The Closing Deadly Melody